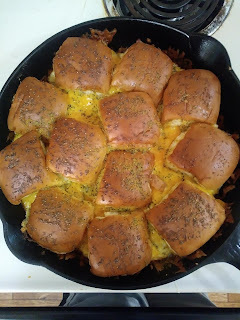 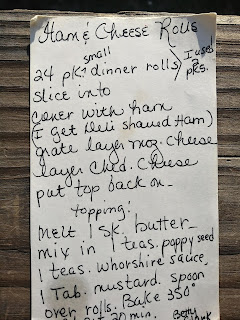 These sandwiches were amazing! When I think of hot ham and cheese I think of the foil-wrapped sandwiches we used to get during school lunches, basically lunch meat style ham, and a cheese slice slapped in a hamburger bun and heated. Not that it was bad per se, just nothing special. These intrigued me because they had the poppy seed mustard butter mixture poured over it before baking and I wanted to know how that would work. We had them for dinner tonight because life happened and I had nothing ready. Everyone loved them. Side eyes may or may not have been given over the melted cheese in the skillet............okay, okay I was given the side eye by David because I was hogging it. (sssssshhhhhhh don't tell anyone) Darian wasn't feeling good so he opted out and stuck to drinking and wanted his saved for later. I did that for him. So out of the three of us that had them, we all loved them. These were a 10 out of 10 in terms of flavor, ease, and at a cost of less than $2 per person (we each got 3) you really can't beat it.


I couldn't find any small dinner rolls so I just used a regular bag of 12 dinner rolls from the bakery section of the grocery store. Where she says 'slice into' I took that to mean cut the rolls in half as a whole. I don't have any decent knives so I had to cut each roll individually and I packed them into my skillet as best I could. I did use deli shaved ham. The cheapest one they still had available was Virginia Baked Ham so that is what I got. (I used about half a pound total.) I used half of the big blocks of both mozzarella and mild cheddar. For the mustard, I used regular yellow mustard as I figured if she meant dry mustard she would have stated mustard powder. I baked as directed. Sides that would go with this would be Bob Gip's Coleslaw,  and Peach Salad (two Sister Weaver recipes), chips, a simple side salad or potato salad and to drink sweet tea (of course), lemonade, or flavored water. We had it just by itself with a piece of fruit and water to drink. Simple but good. :)