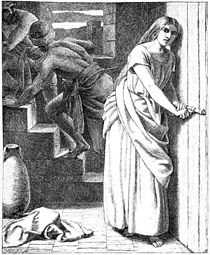 Rahab the mother of Boaz in the Matthew genealogy of Christ was a prostitute, .... a prostitute! How many of us, even now, when it isn't a death sentence, are willing to put out that there's a hooker in the family? I mean I don't know too many of us willing to socialize with our, let's just say, more colorful family members, let alone announce them to the world. Let's face it, we Christians can hardly be called Christ-like when we judge others for far less. So why? Why would Jesus want that known? What made Rahab so special? What exactly can we learn from a pagan prostitute? Well, according to what I've read, turns out, more than you might think.

Let's look at her story. For starters, Rahab knew her own mind in a time when women often had none. She didn't hum and haw when she was given her king's order to turn in the Israelite spies. She brazenly defied it! She made the decision to lie to the king's men and commit treason. Her words were that she didn't know who they were, that they left at dark and had no clue where they had gone, and that they would have to hurry to catch them. She deliberately sent them on a wild goose chase. This is a woman who according to Mosiac law was worthy of death. The laws of the men she harbored didn't care if she was a prostitute in a temple or a common streetwalker, either way, she was not worthy of life by the very men she was risking her life for! She could have been a temple prostitute of high standing in her own community and it wouldn't have made a bit of difference. She had to have some kinda faith in something to do something like that. When the king's men left she took the Israelites to the roof, further hiding them in her flax. She KNEW God had given the land to the Israelites. (Joshua 2:9). She admitted there was a dread over all the land because of what God was doing for them. That word had been told of how their God had dried up the Red Sea, what happened at Sihon and Og, and to the Amorite kings. Her people were in fear and yet she had the resolve and frame of mind to do what she felt she had to in order to save her family. That the God they followed was the God of heaven and of the earth and she, a prostitute, wanted His protection. She was asking the same God, whose laws condemned her to die, to save her, and not only her. She had the guts to ask for her entire family too! She made those men swear by the same God whose laws condemn her that she and her family would be spared. It's worth noting, her family wasn't a husband and her children. Her family was her parents, her siblings, and beyond. She was not married. The Bible states that the house was hers, she was a property owner. SHE was making the decisions. No shrinking violet here waiting for things to come. She was a businesswoman, a woman used to having to make decisions and one that saw the storm ahead and took action. She took risks, life-changing risks in trusting that the God that was handing over lands to His people had the power to save her and the ones she loved. How many of us have the strength to defy a king's order, committing treason, to trust in a God you don't know or have only known through rumor? I don't. She got their oath, and as the story goes, she let them down the wall using a rope from a window. (Her home was part of the wall.) Pay attention to the fact their faith wasn't as strong as hers as it was only AFTER they reached the ground did they give their conditions. The condition, was for her to have the scarlet cord in her window and to have her entire family in her home, to stay within it once they return to take the land and to not betray them. She agreed to this. When the time came Joshua ordered that she and her family be brought to safety while the city burned per their agreement. (Joshua 6:22-25) God honored her faith in Him.


Rahab was one tough cookie! She really didn't care who she had to defy in order to make sure her family would live. She turned her back on her country, her gods, her king, everyone and turned toward God. She knew they were doomed, all of them if something wasn't done. She took a chance. She DID something. She put her faith in God, a god she had heard was wiping out cities like hers and giving them over to His followers. She could easily have been taken captive afterward and/or killed. There was no way to know for sure what would happen. The fact she was a prostitute though, pretty much gave her a one-way ticket to death. She did it anyway! I don't know if she believed in the sense that we think of today with all the lovely sentiments of feeling safe and welcome. I do know she recognized God's power. She knew who He was and she was going to keep her family and herself from dying in whatever way she could. She might have indeed had all the warm fuzzies we think of now when we think of turning toward God, but if she did it isn't mentioned that I know of. What I do know is she saw, clearly saw, their fate if she didn't put this knowledge into action. She put her trust in God and He didn't fail her. How often are we told it only takes the faith the size of a mustard seed? Here He proves it. She stepped out and He caught not only her but her entire family. What an amazing God we serve!
Posted by Teer2008 at 4:41 PM