Women of the New Testament: Tamar 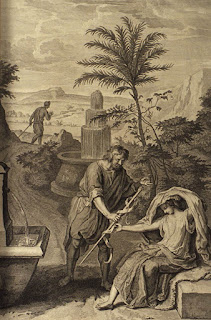 When a woman is mentioned in the bible I pay attention but when a woman is included biblical genealogy I immediately want to know not just why. I also want to know what about her makes her special. When she is in the genealogy of Christ himself I HAVE to know why. We just aren't a common voice in the patriarchal history of Christianity, so when one of us makes that cut I want to know all I can about her. What makes her special, what is it about her that stands out, what makes her tick, what did she do, why did she do it, and most importantly, what is God saying here? I want to know.

Her story begins in the old testament book of Genesis in chapter 28. She is also the very first woman mentioned in the new testament, found in the Gospel of Matthew 1:2. She was the daughter-in-law of Judah, married to his son Er, his firstborn. When she was sent to her father's house by Judah after the deaths of both Er and Onan, she went, to wait on Shelah to come of age. Now, according to the tradition of the time, any children she had with Onan would be credited to Er. After Onan died the next brother was Shelah, and any children she would have had with him would likewise be credited to Er, her first husband. She waited dutifully as asked. Now, as a parent, I understand why Judah was in no hurry to give her to Shelah after losing both Er and Onan. I admit I'd probably be hesitant also. Tradition, being what it was, gave her the right to do so despite any misgivings on his part. Ultimately Judah didn't follow through and she took action. She didn't pressure him, and she didn't harass him. She waited. After Judah finished mourning his wife and went back to work (in fields to sheer his sheep) she dressed as a harlot and waited for him. He saw her and wanted her. The payment was to be a young goat from his flock. Since he didn't have it she took his seal, cord, and his staff until he could bring it to her. In other words, she took three forms of identification to hold onto until he brought payment. Not knowing who she was he agreed and had sex with her. When he went to give her the goat he'd promised she was gone. Which, in my opinion, makes it pretty clear she knew exactly what she was doing. She knew he wouldn't have payment on hand, and that he would likely proposition her. He asked around for her, but no one else had seen a prostitute in the area. He decided not to press the issue because he didn't want to be laughed at by his peers. Now, when it came to light that she was pregnant, this same man, who had sex with her, wanted to have her burned for prostitution. Our girl though, as she was being brought out to face his wrath, showed him his signant ring, cords, and staff proving he was the father. He admitted her righteousness was above his as he didn't give her to Shelah in accordance with tradition. When it came time for the birth of her twin sons the event was unusual. Zerah's hand come out first, and a scarlet thread was tied to it by the midwife. However, he pulled his hand back in and it was ultimately Perex who was born first. Their conception and their birth both were unusual and it is Perez that's in the direct lineage of Christ as a result.

Now we know the who, what, why, and the how I want to know what God is saying through her. The Catholic Study Bible states that she and the other women are included in the genealogy because their unions were strange and unexpected "culminating in the extreme irregularity of the Messiah's birth of a virgin mother" (pg.1136). That is not all I took away from her story though. Through her, I have learned that a marriage or even two that don't go the way your heart longs for doesn't mean that God can't and won't use you. When you have to return home, as an adult, embarrassing as it is, even though you may not have done anything wrong, you aren't finished in God's eyes. Sometimes we are forced to wait longer than we thought for God's plan to become visible to us, even when we thought we knew our role. Waiting is so hard! When we wait for someone that doesn't keep their promise we ultimately have to make a decision to either stay where we are or to take some sort of action. Never take your eye off God during this time. Know who you are in Him and He will not steer you wrong. When He says it's time to do, then take heart and DO! You will be okay. The path may be unconventional, and even appear scandalous to those who are on the outside looking in. (We all have dealt with people who have wronged us in this way and are probably guilty of it ourselves from time to time.) However unconventional the path may be, if we keep a correct heart, we will not be overlooked by God. He will reward us, in His time, in His way. God bless, and keep the faith.

*Disclaimer I'm no theologian. I'm just a 40something single mom doing the best I can in the world that I find myself.
Posted by Teer2008 at 4:28 PM