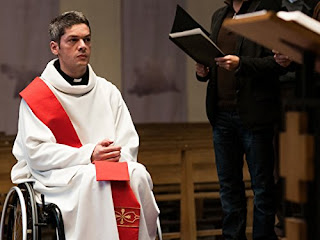 On Netflix, I ran across the French TV series Ainsi soient-ils, (titled The Churchmen in English), about four nights ago. It's a two-time Sèriemania Best Series Award winner and winner of the Best Film Award at the Internation Catholic Film Festival and I can see why. There are three seasons, and each episode is about an hour. The only reason I'm not completely finished is it's not in English and I have to read subtitles. I find myself having to scroll back now and again because I was distracted. (I refuse to miss anything.) This one is binge-watching worthy and I have done so to the best of my homeschooling mommy abilities. (Read I have kids to teach during the day and at night I deal with the normal sleep fighting we all do.) That said this series is amazing! It really gets into who the seminarians are as people and not just cookie cutter caricatures. It's gritty without being base and you feel as if you really know them and go through their struggles with them. I highly recommend watching, but fair warning it is not for people sensitive to mature content. It hits on human frailty without sugar coating it. I certainly do NOT recommend this one for kids, and only the most mature teens.

The Churchmen takes you on the journey of Yann LeMeguer, Guillaume Morvan, Emmanuel Charrier, Raphaël Chanseaulme, and Josè Del Sarte, five seminarians entering the Capuchin Seminary in Paris France. The head of the seminary and the father figure to the seminarians is Fr. Fromenger. All the seminarians have things that you will love them and despise them for, some more than others I imagine. (Personally, my favorites are Yann, Guillaume, and Josè.) You will find homosexuality, pedophilia, and other hot topics brought up in this series, but what I absolutely love about it is that these struggles do not define who they are. We are given complex characters with heart and substance, not a worn out clichè. Like us they have those things they hate about themselves, the things they don't see but are clear to those around them, and the things that they get hung up on that keep them from Christ. This series is a reminder that priests are men, flesh, blood and very mortal with the same temptations and tribulations as we all have, but with the very real pressure of representing God to the masses. There are also aspects of their sacrifice to the Church that, as a military brat, I recognize and can appreciate. Priests don't get to chose their job as easily and we lay people. Like soldiers, they can put in requests, but ultimately they have to go where they are commanded to go by the hierarchy. Priests sign up for this not in a two, four, six, or even a twenty-year contract. They will die priests. They give up the right to a wife and family and take a vow of chastity. If the US military did this we wouldn't have a military at all. I, like most faithful, love, respect, and appreciate the sacrifices our priests make, but not everyone shares this sentiment. There are many that have a knee-jerk opposition to the Catholic Church and those that represent her. The Churchmen shows how hard it can be for them both, old and young taking on responsibilities they don't feel ready or qualified for and how heartbreaking the reality of the priesthood can be to our idealistic new priests. This series brings it to the forefront just how much control of their own life they truly do give to His service. Here in the southern US, I've faced a little of the ignorant intolerance even other Christians have for the Catholic Church, but how much more our priests face! With every scandal, they are all painted with the same brush and hated through no fault of their own. This series brought home for me just how much our priests, young and old need us. They need our support, our love, and our prayer as much as we need theirs.

Please join me by taking a little time each day during this last part of Lent to pray for beloved priests.