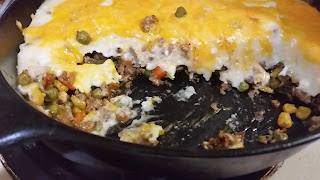 Now my friends and family in the UK will say this is cottage pie. Technically they are correct as it's not made with lamb or mutton. However, I grew up calling it Shepherd's pie as has every American I've met, and being a military brat I have the added bonus of having lived in a few different states....denial and confusion being the most visited. Ha! So to my UK friends and family.....yes, feel free to roll eyes at us "Colonials" and "Yanks". We love you anyway! *insert big loud American hug here* (We won't tell them I usually have iced tea with this....I don't think the eye sockets could stand that level of rolling! Hahaha!) Seriously though, this is amazing and I know they will like it just as much as I like 99 Flakes, a true cuppa, and chip butty's.

Boil the potatoes in the water until fork tender. Drain and mash with the cream cheese, butter, salt, and pepper. Add milk a little at a time to reach a spreadable consistency but be careful not to over mash and end up with wallpaper paste.

Cook the ground meat until cooked through and starting to caramelize. Drain some of the fat if needed, you do want to leave a bit though. Add the flour over the meat and fat in the pan and stir to create a roux. Add the Worcestershire sauce and stir. Dump in the veggies while frozen. Add the bouillon and seasonings to taste. You may need to add a little water to get a thick gravy going.

In a cast iron skillet (preferably the one you cooked the meat in) or a casserole dish spread out the meat mixture evenly. Top with and spread the mashed potatoes evenly. Sprinkle the cheese over the top and bake in a preheated 375° to 400° oven and bake until the cheese is melted and bubbly.

Vegetarian: You can use tvp or another type of meat substitute crumble

Vegan: Use a vegan friendly meat substitute or tvp, a butter substitute such as Earth Balance, and a nondairy milk such as rice or almond, vegan cream cheese, and vegan cheddar - all can be found in google searches, though the first thing that showed up for vegan butter was ghee, this is NOT vegan, ghee is made from butter so be sure to know what you are purchasing

Clean Eating: Since potatoes are supposed to be in moderation you can substitute cauliflower puree for some or part of the mashed potatoes, Instead of frozen veg use fresh and possibly up the vegetable to meat ratio. Instead of bouillon use homemade broth or at the very least get a low sodium variety. 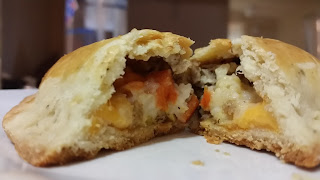 You can use any pie crust recipe for this really, just roll it out, cut out large circles (I used a cereal bowl at one time for this, but anything round will work, the size of course will determine how much filling you use in each one.) I'm including my technique for the crust as I really don't use measurements when I make them anymore.

3 c. all purpose flour (give or take)
salt and pepper
seasonings of choice (in this recipe I used the Greek seasoning)
1 c. grated Cheddar or Colby
3 good dollops of lard, butter, or margarine about the size of an egg each
milk
same filling and potato recipe above but halved
water (to moisten the pastry edges)
1 egg beaten to wash the pastry with

To the flour add the salt and pepper, Greek seasoning and whisk briefly to mix. Add the cheese to the dry ingredients and blend in careful to coat and separate (keeps it from clumping together). Add in the lard and cut into the flour mixture. (I use my hands.) Add just enough milk to bring the flour and fat mixture into a ball. Let it rest about half an hour in the fridge. On a floured surface divide the dough into half and roll out as you would for a regular pie crust. Cut out the circles, flour them lightly to stack, keep going until the dough is gone. (Yes, some of them will be tougher than others, but I reroll the scraps and keep going until I have used everything up.)

Once they are all rolled out add the filling. Now add a dollop of mashed potato. (Be careful with how much filling and potato you use so they don't squish out of the sides.) Wet the edges, fold over, and crimp with a fork. Once they are all made, put them on a baking sheet, and brush with the egg wash. Bake in a preheated 400° degree oven until golden brown. Let cool before serving. I have frozen these many times to be heated up for a quick snack for teen boys or as a packed lunch for work.

* I don't usually add cream cheese, but I had it and it needed to be used. Don't be afraid to use what you have.

Vegetarian: skip the lard and go with butter or coconut oil

Vegan: see above, and use vegan friendly cheese for the topping, use rice or almond milk, for the egg wash use a bit of olive oil or coconut oil

Clean Eating: You can keep the lard (just be careful how it's processed) or you can use butter,
Posted by Teer2008 at 2:48 PM