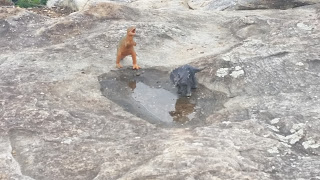 I don't know about your kids, but my kids are dino-nuts! Three out of the four library books they picked last week are about dinosaurs. My house is FULL of them. I hear the roaring and other strange dino-sounds all day long that they have learned from documentaries we've watched (over, and over, and over*wimper*). I tried limiting the amount of dino toys. I have tried the park, monkeys, fashion, birds, and even bugs to hold back the dino bursting dam ..............nope, no good. They know so much about dinosaurs that they teach me about them! They are fascinated with herbivore vs carnivore vs omnivore, teeth, bone structure, self defense, and survival instincts. At the park it isn't tag they get everyone to play, it's T-Rex, and my daughter is always the T-Rex trying to eat all the other kids (the herbivores, if eatean (tagged) you're out.) They even sing songs about them! *insert small defeated cry here*

Today, today I went with it and read those dino books...............I hurt my throat on the roars. All because I'm the cool mommy, I do voices. Soooooooooo today the dinos win. I give up! They can have and play with all the dino stuff they want while I drink cool water and nurse on ice cubes. The kids got the stories they wanted read to them by mom (with all the glorious sound effects), they had a blast giggling over the antics of the Dinosaur in Dinosaur vs. School by Bob Shea. They played a book version of hide and seek in Tyrannosaurs Reg by Dan Crisp. They had fun looking at new animals in Prehistoric Animals by Peter Zallinger. Right now they are playing with their toy dinosaurs in the kitchen. In their imagination they are living in a prehistoric wold full of volcanoes, meteors, huge herds of giant reptialian herbivores, and a baby triceratops trying to befriend a pancake eating t-rex in the middle of it all. Now that takes some creativity! Thinking about it, maybe there are no losers here. The kids are happy and they have learned new things, had mommy time, and are playing out the stories we read. Me, I got cuddles, giggles, and happy kids that learn. I think a scratchy throat is a small price to pay for that.
Posted by Teer2008 at 1:21 PM