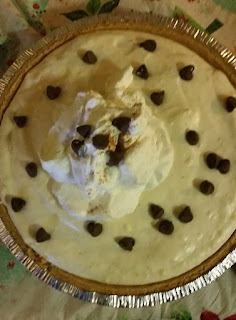 Ida, one of my PA heart babies LOVES this pie.She (half) jokingly asked me to make her one and since I still had the ingredients for it, I agreed. It shocked her, but she is worth it. (I don't think she really thought I'd do it!) It's been 'Ida's Pie' since. It is actually a Bavarian pie and the recipe I used is from The Good Housekeeping Cookbook 1963 printing. The picture above was made with chocolate chips instead of shaved chocolate because I have a daughter that even now knows all my secret chocolate stashes. (I have noooooooooo idea where she gets it.........cough! cough!) I also use a store bought crust instead of making one from scratch most of the time, but a nut crust is my favorite (especially if it's pecan).

Combine the gelatin, 1/4 c. of sugar, salt. In double boiler top, beat egg yolks; stir in milk, gelatin mixture. Cook over hot, not boiling, water, stirring, until custard coats the spoon. Stir in vanilla. Refrigerate, stirring occasionally, until mixture mounds when dropped from spoon. Beat until just smooth. Beat egg whites till fairly stiff; gradually add 1/4 c. sugar, beating until stiff; fold in custard, whipped cream. Turn into shell; sprinkle with nutmeg. Refrigerate until set. Serve with shaved chocolate on top. (The recipe says you can use the whipped cream as a topping instead of folding it into the pie, but we prefer it folded in.)

I wish I had a better picture, but they never lasted long enough for me to get one, and the only other one I took had Ida with a grin from ear to ear pretending to lick the whole thing. I wish I could find that picture! We always had a blast cooking together.