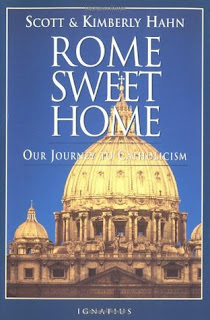 While I was 'a Catholic in training' this book helped me feel less alone. My very fundamentalist background (Pentacostal and Southern Baptist mostly) left me with a lot of misinformation about the truth of the Roman Catholic Church. This book helped me understand not only the errors of what I'd been taught but also navigate my mixed feelings. Scott Hahn was relatable the first time I read it because I shared his mistrust of the Catholic Church, maybe not quite as deeply as he did, but I was NOT happy with the direction I found God leading me. There were times reading it the first time it felt like Mr. Hahn was writing straight from my own life. His reaction to a rosary was similar. His friends not knowing what to do and many leaving was dead on. Reading his journey was really like reading my own. As a newcomer to the faith all those years ago there weren't many conversion stories to help naviagate the emotions, and the realities of converstion for many of us. Rome Sweet Home was healing in the sense that it took some of the sting of loneliness out of the journey.

The second time I read it, not long ago, I began to understand Kimberly better. While I appreciated Kimberly's part when I first converted it wasn't until I reread it years later that I began to understand her. Now that I gotten past the honeymoon phase of marriage, her frustrations with Scott going in a different direction were more relatable. Not making waves and trying not to think about what was happening and her discontent is something more relatable now that I have increased in age and experience. Reading her internal conflicts while she watched her husband become someone she barely recognized helped me to want to go back to Mass and rekindle my love for God. While in her story she and Scott were united in the Church and mine did the opposite, her courage to follow God's lead no matter the outcome has given me new hope. Not for my marriage, that ship has sailed and I'm at peace with that, but for my children. The good news is that He is always waiting for us with open arms. I close my eyes and trust in that every single day.
Posted by Teer2008 at 2:42 PM