This is a recipe from the Sister Weaver Recipe Collection - The title clearly says Good pie.............except I FAILED miserably.


There were no instructions, just an ingredient list, but how hard can it be. I mean it's pretty much just concentrate and cool whip almost poured into a pie shell, a premade no-bake pie shell at that. You just dump it all in a bowl and mix, right? Apparently not. In my defense I've never in my life made a no-bake pie until I started making these recipes. Nope, not one. I had images of beautiful pink (because who doesn't love pink lemonade?!) filling with a dollop of cool whip....I have NO idea what I did wrong. It was NASTY. 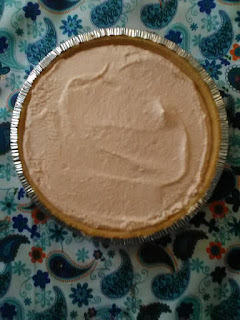 And it certainly was NOT pink.............more a weak chocolate milk brown. NOT good. Soooo I can make bread from scratch, cook an ENTIRE Christmas dinner plus desserts, and feed an army of kids, but I failed on this pie. I am LAUGHING! Brought me down a peg or two for sure. It was a liquidy, curdled mess, and one huge NOPE! I guess I'm putting this one back in the back until AFTER I look up just what exactly I did or didn't do right.